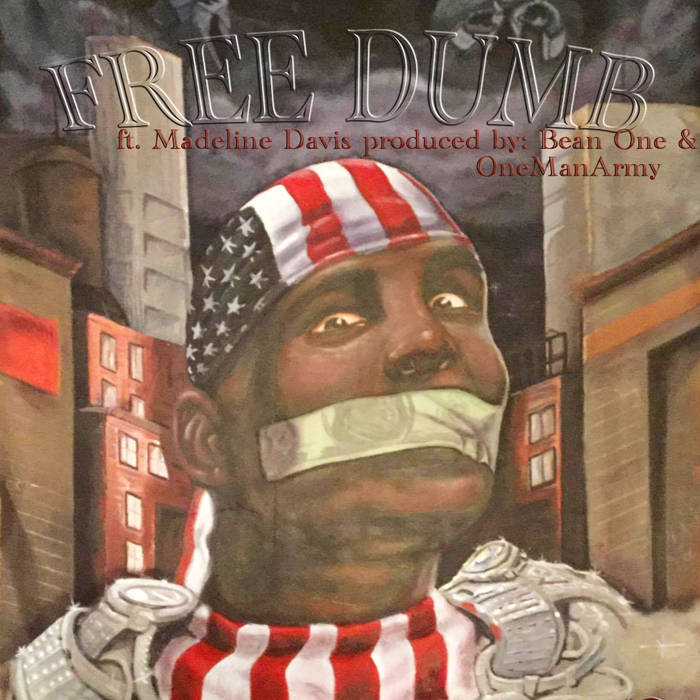 Long time friend and artist Quindell Mitchell aka Quest gifted me with this cardboard painting over five years ago. I knew him as an emcee, so when he returned from prison I was expecting to get him in the studio but instead, he told me that he taught himself how to paint and offered this painting as proof. He made paint brushes from the hair he found in the barbershop and painted on cardboard when he didn't have canvas. I have been holding on to this gem waiting for the right time to collab and share this story with the world. The painting contains symbols that represent oppression of speech and those who represent that oppression. This piece is dedicated to those who create new ways of expression at those times when nobody will listen to their voice. A picture can paint a thousand words.

"A whole lot of emcee's on the scene
But I'm so complete
And they don't compete
When they lost their style
The contract was foul
Who, What, Where, How, When they're told to speak
My soul is free
Even fans wanna lock One Be Lo in a box, but I hold the key"

Free Dumb is Born is about Freedom of speech and the contradictions/repercussions that come along with it. Children are taught to speak, but are not allowed to say certain things. Artists have fans, but eventually these same fans try to pigeonhole their favorite artist into a box, so they can't make the music they truly want to make without losing fans. One Be Lo also gives us a brief reminder in African American history by explaining how the same words that set you free can also get you murdered.

"Denmark Vessey, Nat Turner too
Communicated in Private, the Truth shall set you free
The same words get you murdered too"

Madeline joins One Be Lo on the hook:

"Why
Do they try
To keep me in a box content with telling lies
It seems sometimes, it makes me wanna cry
But immo keep on telling this freedom until I die"

I learned how to voice at home
Baby boy,
the food and the toys alone
Anything that i wanted I would wine and moan
Speech unknown,
my words like a secret code
"Ma Ma...Da Da"
I repeat what's shown
Who is that in the background?
Queen of Soul
I would dance to the music
Body got bigger...
vocab bigger
I would speak my own

Playmates communicate...
Momma used to say 'ease the tone'
Especially when you speak to grown
I was so damn 'oops' upside the dome
If my poppa heard me cuss, my hide was Ohhh
Where you learn how to say that? boy you wrong,
I said 'I over heard you talking on the phone'
See its a whole lot of things little kids can't do,
When i grow up, i wanna be just like you"

Move along to an older me
Music is a J to the O to the B
The world know me as a dope emcee
Make girls wanna dance like Josephine
A whole lot of emcees on the scene
But i'm so complete
And they don't compete
When they lost their style
The contract was foul
Who, What, Where, How
When they're told to speak
My soul is free
Even fans wanna lock One Be Lo in a box,
But I hold the key
Old man said if you don't please,
Then you gon' starve
And you gon' freeze
And what they gone do when you' on the streets?
I said, I don't know
But play these beats
And I'm gon' toil and I'm gon' teach
In the soil you reap what you sew
I gotta go these seeds

The African American Slave
Names and language,
not the same today
Back then no choice,
had to pick in the sun
No voice could speak in original tongue
We would learn this English broken...
We would work and sing devoted...
Masta really didn't know what was going on
When he heard we was singing about Moses
like, Go down...
Wade in the H-2-O
Look around,
everybody trynna save they soul
It's a Negro spiritual,
maybe so
Break the code,
its time to escape and go

Underground railroad knew the verses too
Harriet Tubman and Sojourner Truth
Denmark Vessey, Nat Turner too
Communicated in Private, the truth shall set you free
The same words get you murdered too
Catch a run away slave in return for loot
That dash...
Backlash...
Quick to get'em hung
Torture the old,
and send a message to the young
President Lincoln said, Instead of run
Every nigga get a gun, and you're free when its done
I fight for the Whites if it really is true
When I'm free,
I wanna be just like who?"

from The Original BORN ONES, released February 27, 2016
Produced By: Bean One & OneManArmy
Lyrics By: One Be Lo, Madeline Davis (chorus)
Recorded in Michigan(InkLHB), Indy500
Mixed and Mastered by: Autocons