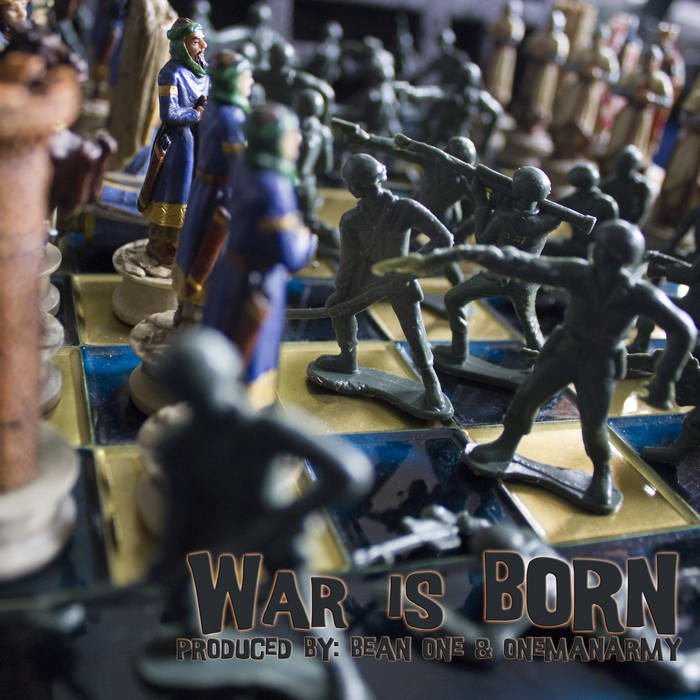 While on tour in Athens I saw this chess board in a gift shop across the street from the Acropolis, along with custom handcrafted Muslimun and Crusader chess pieces and I had to have this in my collection. Upon returning back to the studio I set up the chess board, then added plastic army soldiers to this installation to show how the game is often played in real life. Sometimes a picture paints 1KRhymes. Photo and installation credit: GNRLsbLMNL

War was originally released on One Be Lo's Rebirth album. War is included as a bonus track here because it was one of the first tracks Bean One Recorded Nahshid on, once Nashid entered Seattle. On this song, One Be Lo spits separate narratives, both about a person who is minding their own, but gets pulled into altercations due to uncontrollable circumstances. Similar situations can happen to any one of us at any given time, that's why it's better to think before we speak on how the next person may handle a situation.

"Now in a certain part of town you gotta roll deep
These cold streets will make you wanna hold heat
These cannibals don't always show you their teeth
They watch you from a distance, and wait for you to go to sleep."

Now in a certain part of town you gotta roll deep
These cold streets 'll make you wanna hold heat
These cannibals don't always show you their teeth
They watch you from a distance and wait for you to go to sleep
Now what you doing driving late night?
Your license plate say from 'out of state' right?
These local cats will have you on the chase like O.J.
Have you caught up in a game that you don't play
Killing over turf,
it's only getting worse
The nickel burst,
Hit him first
Miss him in the dirt

Another brother dead,
'cuz he keep shit live
Twenty-Four-Seven on a Three-Six-Five
Rolled up on a 'Stang with the V-Six shine
But the owner had it on him, caught him by surprise (pow)
One bullet and his chest was split
Two years for the gun,
no murder charge,
self defense

Now a man got a family so he work hard
His wife's stomach grows large and she wears a scarf
And tho she don't own the biggest car, biggest crib
Hey shine like a Binary Star, thick and thin
One God, they try to live a life without sin
It's hard 'cuz you gotta live ya life around men
So every where you turn,
it's a physical war
spiritual war
chemical war
mental or more
Heads know he turn his faith over to God
Now the Feds at his door, cuz he go to the Mosque
Last year he went to Saudi Arabia Hajj
Now they're trynna say he linked with Al Qaeda, Jihad
In front of his eyes, raped his wife
Then decided to to his life
Put her on a plane, late that night
Deported her back to Iraq
She gave birth to a seed growing up,
knowing facts like that?
Dwelling on the past
Twenty years,
training to bust
Blood stain in his path
He's a dangerous man
You would label him a terrorist,
Say what you gotta say,
But Allah knows somebody gotta pay, guess who's on his way?

from The Original BORN ONES, released February 27, 2016
Produced By: Bean One
Lyrics By: One Be Lo
Recorded in Seattle
Mixed and Mastered by: Bean One
Remastered by: Autocons